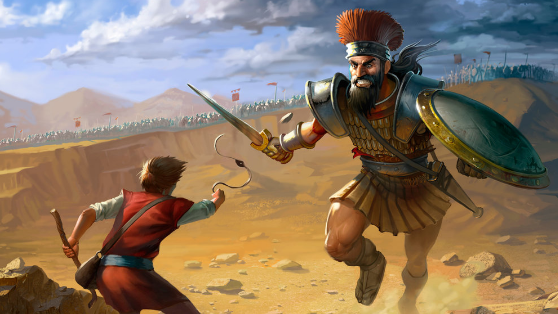 PREMISE: King David existed.
PURPOSE OF ARTICLE: To expound on recent archeological discoveries that validate the existence of David.

And if he existed, scholars claim that he was an insignificant leader who hardly had the impact that the Bible says he did. According to them, the fact that his name is never mentioned in ancient documents shows just how limited his influence was. Says one skeptical writer: “If a historical ‘David’ inspired tales of a legendary king, the original was an inconsequential bandit chieftain in the Judaean hills, nothing more.”1

Archeologists also say that, based on the evidence, the United Monarchy (the kingdom that united Israel and Judah under the reigns of King Saul, King David, and King Solomon) could never have existed during Iron Age IIA (1050-930 B.C.). In a highly-praised and meticulously-researched book titled Egypt, Canaan, and Israel in Ancient Times, prominent Egyptologist Donald Redford claims that all biblical accounts from the United Monarchy period constitute “academic wishful thinking”.2

If David never existed, then we as Christians have a problem. 1 and 2 Samuel would have to be tossed out of the window as highly inaccurate records of history. The Psalms would have been authored by an unknown poet. Jesus’ recorded ancestry would be in error. Worst of all, Jesus himself, who viewed David as a historical figure (Matthew 12:3, Mark 2:25, Luke 6:3) would have been wrong.

Thankfully, this is not the case.

On July 21, 1993, an archeological team led by Professor Avraham Biran was excavating Tel Dan (in northern Galilee) when it found a triangular basalt stone slab now known as the Tel Dan Stele.3 On the slab, thirteen lines were inscribed using a very early form of Aramaic, and the ninth line contained the phrase “House of David”. At first, scholars theorized that this might refer to the “House [or temple] of Dod” (Dod being an ancient deity), but exactly a year later, two more pieces of the stone were found.4

The result was an inscription originally erected by an Aramean (ancient Syrian) king before 800 B.C. In it, he boasts of a war victory against the cavalries of the “king of Israel” and of the “king of the House of David.”5 Scholars now agree that this is the first and earliest extra-biblical reference to the House of David, and that it strongly indicates that a king named David indeed established a dynasty in Israel that was still remembered well after his death.

The Tel Dan Stele, now on display at the Israel Museum in Jerusalem,6 is significant because it was written by one of Israel’s enemies, who likely would not bring attention to a nonexistent or unimportant king of Israel.

In the famed Louvre Museum in France lies the Mesha Stele, a basalt stone slab three feet high and two feet wide. The inscription on the stone consists of thirty-four lines written in ancient Moabite.7 The author? None other than Mesha, the ruler of Moab in the tenth century B.C.

After studying the slab for seven years, French scholar André Lemaire concluded in Biblical Archaeology Review that the phrase “House of David” appears in Line 31.8 According to Time Magazine, “The skeptics’ claim that King David never existed is now hard to defend…If [Lemaire is] right, there are now two 9th century references to David’s dynasty.”9

But what are we to make of claims that a complex government could not have existed in Israelite territory during the time of David?

As recently as December of 2014, a Mississippi State University archaeological team led by Jimmy Hardin (associate professor of anthropology) discovered six official clay seals at Khirbet Summeily. This Khirbet is in Tell-el Hesi and lies to the east of Gaza. The seals, also known as bullae, were used to seal important official documents.10

Hardin’s team conducted radiocarbon dating and an additional technique known as archaeomagnetism (determining the age of an artifact by studying the effect that the Earth’s magnetic field has on the surrounding minerals). The results were published in the December 2014 issue of Near Eastern Archaeology, and Hardin concluded: “We are very positive that these bullae are associated with the Iron Age IIA, which we date to the 10th century B.C., and which lends general support to the historical veracity of David and Solomon as recorded in the Hebrew biblical texts.”10 In other words, these seals defy claims that a complex government could not have been formed in tenth-century Israel.

Rest assured that there is archeological proof for King David, the biblical hero who united Israel and became an ancestor of Jesus. Even though it took several millennia to find, this evidence proves once more that the Bible contains an accurate record of history and does not distort the facts for the sake of publicity or convenience. And as far as archeology is concerned, remember that time is a great vindicator. I have a feeling that there is still more to be discovered about the man after God’s own heart.

thanks for your research

Good work. I did some research on the Tel Dan Stele in university. These sources, while hard to find, are worth it, especially given that they prove facts in the Bible.

Thank you, everyone, for the compliments! This article was very fun to write.

King David is my hero. thx for the article!!

but here’s a question to think about …. how come the steles had to be reconstructed? What if these reconstructions were not accurate?? – Perry

Good question, Perry. For those wondering about Perry’s question…I did not mention this in the article, but the Mesha Stele was broken by local Bedouins and had to be pieced together. Thus, I offer the Mesha Stele as secondary evidence. However, most scholars agree that the Tel Dan Stele contains an accurate mention of King David, and the reconstruction work on the Tel Dan Stele was far less extensive that what would have to be done for many Iron Age IIA artifacts. Naturally, because there are fewer artifacts from that time and they are all very aged, reconstruction is a… Read more »

I have never commented personally on an article before, but this one is great. I know how much research it takes. We’ll keep praying for your ministry to grow in the Lord’s good timing. Thank you!!

The mesha stele is in the Louvre? cool! Great article by the way.

The Mesha Stele indeed lies in the Louvre. You can see it to this day, a testament to the accessibility and longevity of this kind of evidence.

This is fascinating. I’m actually surprised that there are so few mentions of him, but I’m glad these steles exist.