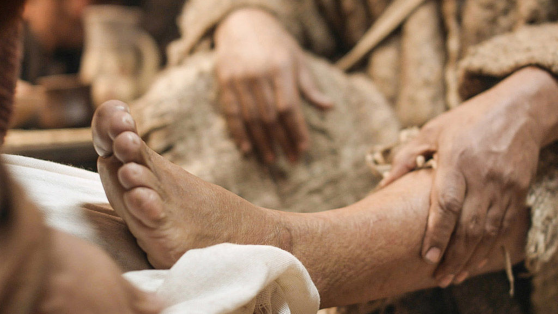 The book of Mark is direct and dynamic, action-filled and dialogue-light. Mark begins his book with a flashback to an ancient prophecy by Isaiah, then transports us to a barren wilderness where John the Baptist preaches the powerful message of repentance. Immediately after, Jesus appears. Not once is there a reference to Jesus’ birth or genealogy.

Why is this? Because Mark’s primary focus is on Jesus as a servant. A servant is lowly. A servant requires no royal introduction, no grand entrance, and no detailed record of ancestry. A servant’s words are often unrecorded, though his deeds may be remembered.

As we have traveled through the book of Mark to get a better picture of our Savior, we have seen him as a hater of hypocrisy, a promoter of righteousness, and a man oriented on heavenly things rather than earthly temptations. Today, we add to our mosaic the idea of our Savior as a servant. If you think that this is rather unrelated to the Advent (or Christmas), your mind may be changed as we explore the aspects of Jesus’ servanthood as displayed in Mark.

1. Jesus taught the principle of servanthood.

In Mark 9, the disciples are arguing in Capernaum about which one of them is the greatest. Jesus, perceiving their thoughts, says, “If anyone would be first, he must be last of all and servant of all” (v. 35).

In Mark 10, James and John request to sit at Jesus’ right and left hand after he comes into his glory. Jesus rebukes them: “You know that those who are considered rulers of the Gentiles lord it over them, and their great ones exercise authority over them. But it shall not be so among you. But whoever would be great among you must be your servant, and whoever would be first among you must be slave of all.” (vv. 42-44)

The message could not be clearer. In Jesus’ eyes, true spiritual leadership is marked by love for others and humble service for the good of others. It is not marked by lording authority over others and seeking to be in control.

This can be very difficult to practice. In A Little Book on the Christian Life, Calvin perceptively notes, “Consider arrogant men who, in order to gratify themselves, criticize the character and morals of others. And when contention arises, their venom erupts. As long as everything is going smoothly and pleasantly, they present themselves with a kind of gentleness. But in reality, how few there are who can maintain such a superficial appearance of modesty when they are jabbed and aggravated…Our very nature inclines us toward self-love.”1

In the Gospel of Mark, there is a unique motif of the “Messianic Secret”, in which Jesus strictly commands demons and humans alike to keep his identity as the Messiah secret (1:25, 1:34, 1:44, 3:11, 5:43, 7:36, 8:26, 8:30, 9:9). At first glance, this seems counterproductive to his mission. In The Messianic Secret, German theologian William Wrede proposes that this motif was inserted by Mark and future editors to explain why Jesus only came to be viewed as Messianic after his ascension. But Wrede’s theory hinges on the premise that Jesus was not aware of his own Messiahship, and that assumption flies in the face of his divinely-established exousia (or authority) in the baptism narrative of Mark 1:9-11.2

Wrede’s theory is generally rejected by New Testament scholars today, and for good reason. Mark’s deliberate portrayal of Jesus as a servant does not undermine Jesus’ Messiahship (see Batemen’s 2007 paper in JETS3 and our 2016 article on Jesus’ divinity4). Edwards’ Pillar Commentary on Mark’s Gospel reinforces the notion that “the dominant genre of Jesus’ messianic self-consciousness was transmitted to the early church and to Mark by Jesus himself.”2

But why, then, did Jesus command silence? Without delving into too many hermeneutical complexities, I believe that these commands prevented superficial focus on his miracles, precluded misunderstandings of his ministry, and excluded demons from participating in the work of evangelism.

However, there is an even more profound explanation. In Understanding the Gospels, Balaguer presents a highly plausible reason for the Messianic Secret motif: “Jesus wished to revise the concept of Messianism held by people in his time, and express it in terms more like those referring to the Servant of the Lord described in the Book of Isaiah. This conclusion is derived from other elements of the Gospel – for instance, use of ‘Son of Man’ – but the command of silence is consistent with it.”5

I concur with Balaguer. It is very possible that Jesus forbade free evangelism early in his ministry to ensure that his Messiahship was defined properly – not in terms of political domination, but in terms of physical and spiritual servitude. (In addition, the command to silence enabled Jesus to control the timing of his self-revelation and avoid drawing unnecessary and extravagant attention to himself.) In this, we simultaneously see his servant-oriented nature and his great authority.

But Jesus’ greatest demonstration of servanthood is found in his willingness to die a grisly death on a cross to atone for the sins of humanity. Because of his obedient submission to the will of the Father, the Father has exalted his name above every other name (Philippians 2:9). Indeed, he who became lowly for us has become the greatest of all.

Mark never once focuses on the Nativity story, and yet his Gospel fully captures its essence: that Christ gave up the glories of heaven to mingle with humanity as a lowly servant and atone for sins. He lived a life in service to others and in obedience to the will of God, and the height of his servitude was found in his death. One of my favorite verses in this book is a single profound statement: “For even the Son of Man came not to be served but to serve, and to give his life as a ransom for many” (10:45).

It is so tempting for us (and I am preaching to myself especially) to be focused on jostling for positions of power, prestige, and fame. We sometimes despise service as something that is beneath us. But in God’s kingdom, it is the person who humbly seeks the good of others that will rise to the top. This is perhaps one of the greatest ways to emulate our Savior, point others to his love, and bring greater glory to him.

An articulate and insightful reminder of Jesus’ true character and mission. Well done, and glory be to God!

Thanks, Matt! I appreciate the encouragement. Hope you enjoy future articles, as well!

Keep up the good work, Vinh!

Profound thoughts, and so well-written, as usual. Thanks for sharing this message with us.

Absolutely, Angelo. We’re excited to faithfully continue this ministry and share God’s Word with others.

Thanks, Sarah! Merry Christmas to you, too!