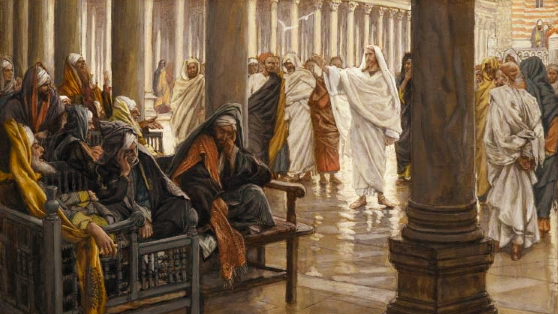 The very first lesson we learn is that Jesus condemns rules without righteousness, and he detests the rote observance of religious rituals without a heart that truly desires to obey God.

LORD OF THE SABBATH

In Mark 2:23-28, Jesus and his disciples are criticized by the Pharisees for plucking grain to eat on the Sabbath and thus doing “work”. Jesus admonishes them with an example of how King David and his men ate holy bread from the tabernacle, even though this was in direct contradiction to Leviticus 24:5-9. If David could do this to satisfy his physical needs, then surely Jesus, the “lord of the Sabbath” (v. 28), would be morally justified in allowing his disciples to satisfy their physical needs in a grain field.

What was originally set apart as a day of rest and spiritual refreshment had been transformed by the Pharisees (the Jewish religious leaders of the day) into a tedious observance of thirty-nine mostly extrabiblical rules on what not to do. They missed the entire point of the Sabbath: to symbolize the covenant between God and Israel (Exodus 31:12-17) and to refresh God’s people (Exodus 23:12).

To get a picture of just how onerous some of these rules were, consider this brief overview by John MacArthur: “[O]n a Sabbath, scribes could not carry their pens, tailors their needles, or students their books. To do so might tempt them to work on the Sabbath. For that matter, carrying anything heavier than a dried fig was forbidden; and if the object in question had been picked up in a public place, it could only be set down in a private place. If the object were tossed into the air, it had to be caught with the same hand. To catch it with the other hand would constitute work, and therefore be a violation of the Sabbath…No bathing was allowed, since water might spill onto the floor and accidentally wash it. No furniture could be moved inside the house, since it might create ruts in the dirt floor and thereby constitute plowing. An egg could not be boiled even if all one did was place it in the hot desert sand. A radish could not be left in salt because it would become a pickle, and pickling constituted work…It was not even permissible for women to look in a mirror, since they might be tempted to pull out any gray hairs they spotted. Nor were they allowed to wear jewelry, since jewelry weighs more than a dried fig…One of the more interesting restrictions related to the distance people could travel on the Sabbath. A person was not allowed to travel more than 3,000 feet from home (or to take more than 1,999 steps). Due to practical concerns, the rabbis devised creative ways to get around this. If one placed food at the 3,000-foot point before the Sabbath began, that point was considered an extension of one’s home, thereby enabling a person to travel another 3,000 feet. Or, if a rope or piece of wood was placed across a narrow street or alley, it was considered a doorway, making it part of one’s home and allowing the 3,000 feet of travel to begin there.”1

And this is hardly exhaustive. We could fill an entire book describing the nuances of the restrictions imposed by the Pharisees on the Jewish people. In the end, you can be sure that the people were more concerned about keeping these rules than actually enjoying a day of rest. What a contrast to Jesus’ words in Matthew 11:28-30: “Come to me, all who labor and are heavy laden, and I will give you rest…For my yoke is easy, and my burden is light.”

In Mark 3:1-6, Jesus goes on to heal a man with a withered hand, and the Pharisees seek to accuse him. Jesus is angry with them and asks, “Is it lawful on the Sabbath to do good or to do harm, to save life or to kill?”

Why was Jesus angry? Because the Pharisees did not observe God’s law for the right reasons, but to highlight their own (pitiful) “righteousness”. There could be only one reason that the Pharisees would seek to accuse Jesus for his astonishing miracle that day: because they wanted to protect their own useless traditions, which had no spiritual significance and only served to bolster their pride.

WHAT WE CAN LEARN

Before we smirk at the Pharisees’ behavior, how often are we like them? How often we read the Bible and pray just because we “have to”? How often do we criticize other Christians for not following a set of rules and regulations? How often are we so caught up with how right we are that we forget to love even those whom we disagree with? How often do we grudgingly come to prayer meetings or church services just to show others how faithful we are?

Remember that Jesus hates it when we do these things. In the Bible, he never minces words when it comes to criticizing the false pretense of religion. We may serve and worship God, but until we can rid ourselves of merely “practicing religion”, we are only “having the appearance of godliness, but denying its power” (2 Timothy 3:5).

To all of us (myself included) who think we can get away with this, Jesus would say the same thing he told the Pharisees in Mark 7:6-7:

“This people honors me with their lips, but their heart is far from me; in vain do they worship me, teaching as doctrines the commandments of men.”

The Pharisees always reminds me of how I got saved, because as a Roman Catholic, I could easily equate the Pharisees with the priests & nuns that taught man-made traditions as if they were the commandments of God. Many times these religious traditions were contrary to clear commands of scripture. There was also a palpable since of righteousness if these man-made rules were strictly kept. What a glorious sense of freedom was mine, when through the Gospel and the pure Word of God; I saw my righteousness was only by the Gift of Christ, not by my obedience. I also… Read more »

Amen!! What joy we can have when we realize the true liberty found in our salvation.

Like it. Will try to remember this when I serve in the church.

Thank you! And I agree – this is something for all of us to remember.

Strong start to the series. Love it.

Blind guides, hypocrites, whitewashed tombes – Jesus did NOT mince words with these guys.

So important to remember how anti-Jesus we are when we act like this ….