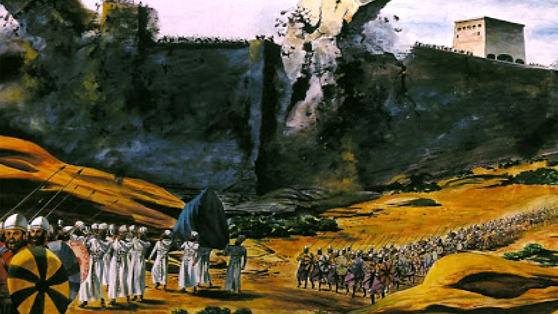 Note: This is the first article in a series on the Battle of Jericho.

PREMISE: Jericho was truly destroyed by the Israelites.
PURPOSE OF ARTICLE: To present evidence contradicting the biblical record of the fall of Jericho.

So begins a famous African-American spiritual based on the fascinating account told in Joshua 5-6. According to the story, the people of Israel approach Jericho, a walled Canaanite city that God orders them to conquer. The city is fortified, and none are allowed to enter or exit it for fear of the Israelites. (Joshua 6:1)

Before planning his attack, Joshua sends two men to spy on Jericho, and they stay with a prostitute named Rahab. When the king of Jericho discovers that the men are there and sends his soldiers to search for them, Rahab helps the spies escape. In return, the spies promise that her family will be spared when the city is conquered. (Joshua 2:1-21)

In the meantime, Joshua is visited by a man identifying himself as “the commander of the army of the LORD”, and he orders Joshua to have his army march around the city once every day for six days, with seven priests bearing trumpets and the Ark of the Covenant. On the seventh day, the people are ordered to march around the city seven times and then shout, “and the wall of the city will fall down flat”. (Joshua 6:2-5)

Joshua obeys, the walls of the city indeed fall down, and Israel conquers Jericho. But how much of this story is historically valid?

In 1968, British engineer Charles Warren completed an excavation of Tell es-Sultan and identified it as Jericho.1 In 1908, an Austro-German team, directed by Sellinger and Watzinger, completed another excavation there.2

Then, in the 1930s, British archeologist John Garstang dug there and found evidence that the city had undergone a violent destruction. After dating the discovered pottery, he wrote, “In a word, in all material details and in date the fall of Jericho took place as described in the Biblical narrative. Our demonstration is limited, however, to material observations: the walls fell, shaken apparently by earthquake, and the city was destroyed by fire, about 1400 B.C. These are the basic facts resulting from our investigations. The link with Joshua and the Israelites is only circumstantial but it seems to be solid and without a flaw.”3

All of this, however, fell flat when archeologist Kathleen Kenyon visited the city and performed her own study of it. While Kenyon corroborated the destruction of the city, she concluded that the timeline evidence actually disproved the biblical story of the fall of Jericho.

To determine this, Kenyon used the Wheeler-Kenyon method, which focused on stratigraphy – that is, the analysis of layers in the soil. Her dating methods used pottery sherds, city walls, and artifact fragments, as well as construction and abandonment patterns. What she found was that the pottery was almost certainly Early Bronze Age in date. In other words, Jericho (particularly Garstang’s City IV) had been destroyed in 1550 B.C., much earlier than 1400 B.C. as purported by the Bible.4 So the Israelites would have had nothing to destroy in the first place.

How, then, was the city destroyed? Archaeologist William Dever says, “Kenyon…proved that while this destruction indeed dated to ca. 1500 B.C., it was part of the now well-attested Egyptian campaigns in the course of expelling the Asiatic ‘Hyksos’ from Egypt at the beginning of the 18th Dynasty.”5

Kenyon’s conclusion made her famous overnight and led scholars and historians to almost unanimously conclude that the Bible is wrong on Jericho. According to Dever, “There is not so much as a Late Bronze II potsherd of that period on the entire site…Simply put, archeology tells us that the biblical story of the fall of Jericho, miraculous elements aside, cannot have been founded on genuine historical sources. It seems invented out of whole cloth.”5

What are we to do in the face of such compelling evidence against the Bible? Find out in our next article.

[1] Warren, Charles. Underground Jerusalem: An Account of Some of the Principal Difficulties Encountered in Its Exploration and the Results Obtained. Place of Publication Not Identified: Nabu, 2010. Print.
[2] Sellin, Ernst, and Carl Hans Watzinger. Jericho–Die Ergebnisse Der Ausgrabungen. Osnabruck: Otto Zeller, 1973. Print.
[3] Hammerton, John Alexander. Wonders of the Past: A World-wide Survey of the Marvellous Works of Man in Ancient times. Delhi: B.R. Pub., 1985. Print.
[4] Kenyon, Kathleen M. Digging up Jericho. London: Ernest Benn, 1957. Print.
[5] Dever, William G. Who Were the Early Israelites and Where Did They Come From? Grand Rapids, Mich.: Eerdmans, 2006. Print.

Excited for the next one, Vinh! The setup is good.

Great summary – this is definitely a controversial issue. Can’t wait for the next article.

Thank you so much! I sure will!