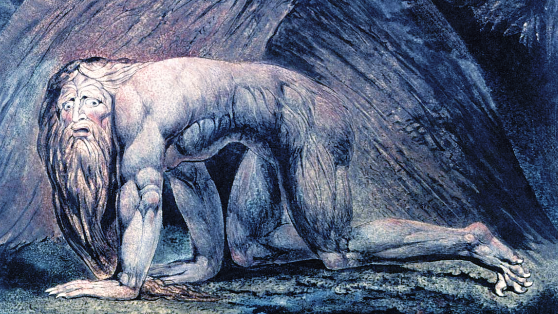 PREMISE: Nebuchadnezzar II was driven to insanity as a punishment for his arrogance.
PURPOSE OF ARTICLE: To show that the account of Nebuchadnezzar’s insanity, as presented in Daniel 4, is not fabricated or inaccurately adapted from an ancient Babylonian legend.

Daniel 4 tells a very interesting story. Nebuchadnezzar II, the great king of Babylon, is walking atop the roof of his palace. Gazing at his vast and impressive capital city, he proclaims, “Is not this great Babylon, which I have built by my mighty power as a royal residence and for the glory of my majesty?” (v. 30)

In response to Nebuchadnezzar’s arrogance, God proclaims from heaven that the king will be driven from men, dwelling with beasts, and eating grass like an ox for “seven periods of time [or years]” (v. 32). This is immediately fulfilled: the king begins roaming like an ox and eating grass, his hair grows as long as eagle feathers, and his nails become like bird claws (vv. 30-33). After the seven years are over, Nebuchadnezzar humbles himself, saying, “Now I, Nebuchadnezzar, praise and extol and honor the King of heaven, for all his works are right and his ways are just; and those who walk in pride he is able to humble” (v. 37).

This is an incredible story, but for some, it is just that – a story. According to the Encyclopedia Britannica, “There is no independent support for the tradition in Daniel of Nebuchadrezzar’s [an alternate spelling of his name] seven years’ madness, and the story probably arose from a fanciful later interpretation of texts concerned with events under Nabonidus, who showed apparent eccentricity in deserting Babylon for a decade to live in Arabia.”1

Hold on, Britannica. Let’s look at what history really says.

1. Nebuchadnezzar was indeed great, and he had no reservations boasting about it.

Nebuchadnezzar, who reigned from c. 605 – c. 562 B.C., certainly presided over a grand kingdom. His army had subdued mighty Assyria and laid siege to its capital, Nineveh. It had mercilessly conquered and plundered weaker nations, including Israel.

Nebuchadnezzar had also fortified three massive forty-foot walls (rising approximately to the height of the Ishtar Gate), one inside the other, that protected his capital city of Babylon.2 Each wall was so thick that eight horses could easily race atop it. And positioned at regular intervals across the walls were watchtowers that stood ten or fifteen feet from their bases. To enter the city, one had to pass through a huge surrounding moat and one of the magnificent gates built into the walls.3

According to tradition, Nebuchadnezzar also constructed the Hanging Gardens of Babylon (one of the Seven Wonders of the Ancient World) to cheer up Amyitis, a Median princess he had married.4 This spectacular site reportedly consisted of an artificial mountain of layered gardens and shrubbery rising high above the city. Babylon was also populated with hundreds of golden statues, as well as more than fifty temples and a great ziggurat (or tower) named Etemenanki (translated “House of the platform of Heaven and Earth”).2

All this did wonders for the king’s ego. In the East India House Inscription, Nebuchadnezzar introduces himself thus: “Nebuchadnezzar, king of Babylon, the exalted prince, the favorite of Marduk, the lofty patesi, the beloved of Nabu, the judge, the possessor of wisdom…the wise, the pious…the first-born son of Nabopolassar, king of Babylon, am I.”5

Yes, this man’s greatness and arrogance are confirmed outside of the Bible.

In the third century B.C., Greek historian Abydenus recorded a story of Nebuchadnezzar: “It is moreover related by the Chaldeans, that as he went up into his palace he was possessed by some god; and he cried out and said: ‘Oh Babylonians, I, Nabûcodrosorus [an alternate form of this name] foretell to you a calamity which must shortly come to pass…A Persian mule shall come, and…shall impose upon you the yoke of slavery…O would that before he gave up my citizens…he might be carried across the desert…where wild beasts have pasture and birds their haunts, that he might wander alone among rocks and ravines; and that, before he took such thoughts into his mind, I myself had found a better end.’ He after uttering this prediction had immediately disappeared…”6

This story is strikingly similar to the Daniel 4 account and bears the same basic motifs.7 In both stories, Nebuchadnezzar ascends to the roof of his palace and receives a divine decree. There is a common theme of him being “possessed”, and both stories reference the Divinely-ordained punishment of wandering amongst the birds and beasts. The difference is that Daniel 4 depicts Nebuchadnezzar as the subject of this humiliation, whereas, in the Abydenus text, Nebuchadnezzar is the one who prophecies about the same humiliation against a future Median ruler.

Nevertheless, the stories are so similar that this cannot be a mere coincidence. Some scholars try to explain away the coincidence by saying that the author of Daniel borrowed and adapted an ancient Babylonian legend about Nebuchadnezzar “in order to make it a vehicle of religious instruction.”8 This might have been the case, if it were not for the fact that: a) “The Chaldee chroniclers [were] notorious for their national vanity and boasting, and were not likely to record anything derogatory to their earliest hero,”9 thus making it possible that they, and not the author of Daniel, edited the story to portray the king in a good light; b) we now have two more pieces of evidence that validate Daniel’s version of the story, and they are discussed in points 3 and 4 below.

3. There was a seven-year period lacking any royal decrees.

From 582 to 575 B.C., we have no records of acts or royal decrees made by Nebuchadnezzar.10 In a time when many of these decrees were issued and preserved, seven years of silence would have been highly conspicuous. It is very likely that these are the same years described in Daniel 4.

If you go to the British Museum, you will find a recently-discovered cuneiform tablet (BM 34113 = sp 213) translated by Assyriologist A.K. Grayson in 1975. The tablet describes a period in Nebuchadnezzar’s life: “His life appeared of no value to him…then he gives an entirely different order…he does not show love to son or daughter…family and clan does not exist.”11 Commenting on this text, Jacques Doukhan says, “It seems that for a while…he [Nebuchadnezzar] gave senseless and contradictory orders, and he could not express affection to either his son or his daughter, recognize his clan, or even participate in the building up of Babylon and of its temple.”12

If you believe in the power of God, then you know that God is not confined to inflicting only diseases that exist in modern medical textbooks. However, in a day and age where skeptics demand concrete answers, we can provide a host of possible psychiatric or medical explanations for the Daniel 4 account.

“Today, psychiatrists have diagnosed Nebuchadnezzar’s behavior as a variant of paranoia and schizophrenia…as rare and strange as the illness may seem, it has been a constant throughout history…the symptoms are always the same. The patient imagines that he has been transformed into a wolf (lycanthropy), an ox (boanthropy), or another animal (dog, leopard, snake, crocodile), and behaves as such down to the most intimate details.”12

Others have suggested that the phenomenon was caused by general paresis or paralytic dementia seen in advanced cases of syphilitic infection.

This story teaches us about pride in two different ways.

First, we must learn that God hates pride and will punish it. If he can lower a great king, he can lower anyone. So serve and worship God in humility, and experience the resulting richness of his blessings.

Second, this story teaches about pride from an academic standpoint. Do you notice how our articles sometimes begin with scholars who flippantly dismiss Bible stories as being untrue? They are so used to dismissing the Bible itself as a book of fairy-tales that they often neglect simple research that would prove their conclusions wrong. So remember that a person can also be proud by thinking they know better than the Bible and treating it as an outdated text that contains errors. No, you are not wise because you have a degree. You are not wise because you’re smarter than everyone else. You will be wise if you fear the Lord and treat his Word with obedience and utmost respect.

May we all learn and apply this lesson to our own lives.

Have you contacted the source(s) mentioned in footnote 10? We would be curious to see what they say.

Awesome article. It’s always nice to hear when researchers stumble upon another proof of the authenticity of the Bible. What bothers me, it took 40 years for me to hear about it. I guess the Internet is good for something.

Thank you, Martha, and yes, the Bible has so often been confirmed by historical, archeological, and scientific proof. I firmly believe that we have yet to discover new proofs that will testify to its truth. Hope you learn and grow from our future articles!

Very well written and documented, appreciate the lesson and conclusion . We are studying Daniel now and anxious to share this!

Thank you, Ms. Virginia! Daniel is certainly a fascinating book. I am so happy that this article was useful to you and hope that you enjoy our future topics!

Very insightful article, Vinh! Thank you for sharing these powerful truths from Scripture. May God’s name be magnified forever!

Thanks, An! I appreciate your support.

This is wonderfully written, Vinh! Thank you for the enlightening article and for always bringing glory to God’s name.

Thank you, Eliana! It is an honor and privilege to serve God. I really appreciate your kind words!

Thanks, Matt, and you’re welcome!

Thanks Vinh for the article. Inspiring as always!!

Thanks, Julie! I appreciate the encouragement and hope you enjoy our future articles!