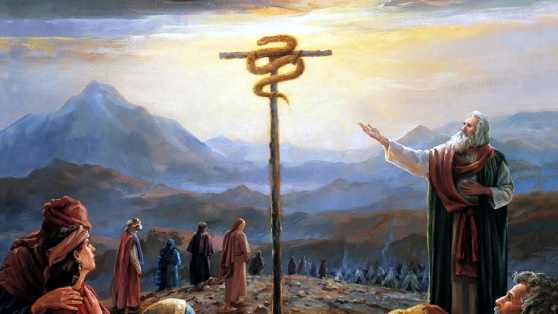 * This article was written by guest author Daniel Jessen, an enthusiastic entrepreneur from North Virginia with a passion for sharing his Christian faith. His interests include swimming, film and media, business, writing, and educational leadership. In response to the Great Commission, Daniel teaches a children’s Sunday School class and actively evangelizes in his community and hometown. Through his contributions to Against Doubt, Daniel hopes to bring about clearer understanding with issues of faith, to encourage those teaching the Bible to children, and to tirelessly give answers for the hope that he has in Jesus, who is coming again soon.

I recently had the privilege of teaching Sunday School, and the lesson centered on the story of the bronze serpent in Numbers 21. It was the perfect illustration of God as just and the justifier, and it was exactly what I needed after our lesson two weeks before on the divine execution of Nadab and Abihu (Leviticus 10).

There was one child in the class who exclaimed, “Why was God so hard on those people? It was just one little mistake. That’s not fair!”

Now, that exclamation stuck with me for two weeks because I had to answer it in more detail than my short time allowed. At the heart of the question was this: how can God be both just and the justifier? How can he save sinners when he must punish iniquity? Thankfully, my next lesson dealt with this (unfortunately, the inquisitive child was not present during this lesson!).

I opened my lesson with a story I heard about a Hindu man that converted to Christianity. He said, “My bank gives me a statement each month. It tells me how much I have, how much I owe, and when the payment is due. My former religion told me none of those things.”

In some religious systems, you have a certain amount of righteousness because of what part of the system you occupy. Payment is due at the end of your life, but you can defer and pay in your next life. This is a truly precarious situation. Some other religious systems believe that Christ’s payment on the cross is insufficient for our justification. In other words, you have to contribute to a part of your salvation until the end of your life. But if you haven’t met your full payment amount, you’ll be forced to resolve the debt in the afterlife. This, however, is difficult to reconcile with the finality of Christ’s work on the cross.

How about the bank statement given to us in the Bible? We owe a debt we can never repay, the righteousness we do have is but filthy rags, and our payment is due immediately upon death (or the return of Christ). After all, “it is appointed for man to die once, and after that comes judgment” (Hebrews 9:27).

What strikes you when you read these examples? Very simply, only the Bible gives you absolute figures to work with! You owe infinity, you have nothing, and there is no way for you to personally bridge the gap. It is with this illustration that the class and I talked about true justice. It would be fair for God to collect the necessary payment upon every sin committed. In fact, every breath that we take is a beautiful demonstration of his grace and mercy.

With that in mind, it should not come as a shock to read of God consuming Nadab and Abihu for violating the standards of his holiness. Nor should it surprise us to read of Ananias and Sapphira falling dead in front of the apostle Peter for lying about how much money they gave. When preaching about the tragic massacres at the temple and at Siloam, Jesus gives a stern reminder: “No, I tell you; but unless you repent, you will all likewise perish” (Luke 13:3). These people were not any more wicked than you or I. Their payment was simply collected earlier than expected.

I asked the kids a question: “Who do we need to be saved from?” I got different answers: the devil, sin, hell, ourselves. But none of these were correct. Rather, we need to be saved from God’s righteous wrath against sin. When Moses asked God to show his glory, God responded, “You cannot see my face, for man shall not see me and live” (Exodus 33:20). Because humanity is naturally sinful, we cannot handle God’s holy presence (Isaiah collapsed in God’s throne room, and the apostle John fell down when the resurrected Christ appeared to him in a vision). I then asked the kids, “Who are we saved by?”, and they all correctly answered “Jesus Christ”.

One of the kids asked, “How can God forgive sinners if he has to judge sin?” At that moment, we turned to Numbers 21 to see God chastening his people in the wilderness for grumbling against him. The chapter describes fiery serpents (perhaps referencing the appearance of the creatures or the pain of the venom) afflicting the Israelites. Why? Because the Israelites continued to grumble against God even after all of the miraculous things he did for them. Even after his faithfulness, they neither trusted him nor sought him. Thus, the consequences they faced were justly incurred, and the same is true for us.

Ultimately, however, God does not leave us hopelessly entrenched in sin. Instead, he reveals his fully glory by demonstrating his mercy alongside his justice. He commands Moses to create a bronze serpent and raise it up, and all those who look at the serpent are healed. Jesus compares his own sacrifice on the cross to the raising of the bronze serpent (John 3:14).

There’s one bank statement we didn’t look at yet, and that is Jesus’. He owed nothing, embodied perfection, and yet made his payment on the cross for us. He could do this because he is the only one who lived a perfect and sinless life. Had Jesus sinned even once, his death on the cross would have been for nothing. But God raised him from the dead to confirm his triumph over death and his payment for the sins of all those who believe and confess him as Lord.

God is a merciful God who saves sinners. He gives men, women, and children of all ages time to repent. Our church recently celebrated the life of a six-year-old who died after a life of medical challenges. Thankfully, when he heard the gospel message, he responded by repenting and calling on Jesus to rescue him from the wages of his sin. Because of this, he is now able to enjoy fellowship in the presence of the Lord.

What the kids in my class understood was this: God is fair in collecting payment for sin at any point in your life, and yet he is so merciful for offering eternal life. He didn’t have to offer any way to salvation, but he offered the one way that would save mankind – no strings attached. That way is found through the life, death, and resurrection of Jesus Christ.

If you are in doubt, check your bank statement. Scripture is written so that you can have assurance of where you stand before God. I encourage you to read 1 John (as well as the Gospel of John and the Book of Romans) so you can review your statement and know if it’s been paid in full. If not, take a moment to seek God’s help in paying your unpayable debt. He is not only willing, but he is also able.

Well said. This generation needs to be taught these truths!!

Thank you brother for your hard work. — Josh

Great stuff, Daniel!
Thanks for the clear articulation of the gospel message!!!

Praise the Lord for the insight and dedication of your team. These articles are always so well-written! – Don