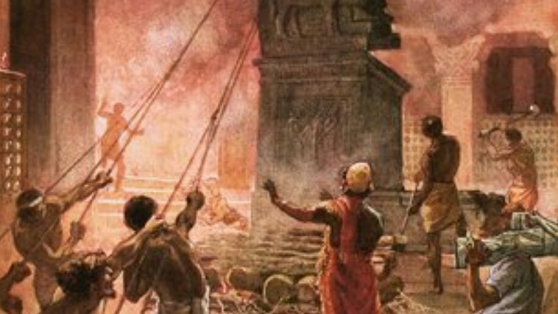 On this day, October 31, we celebrate the moment when Martin Luther posted his ninety-five theses and made a stand against the darkness and deception that had permeated the spiritual landscape. From that call to repentance came the widespread explosion of gospel knowledge: that only by faith in Christ alone are we saved. It is for our greatest good that God’s grace alone makes this possible, all to his glory and honor as the Scriptures testify.

But over two thousand years before Martin Luther, another reformation took place. It was not a common Augustinian monk calling for a faculty meeting, but a king in the line of David: Josiah. And what was posted on the king’s door, so to speak, was not a document of concerns about religious traditions. Rather, it was the plain and open Law of God: the book of Deuteronomy. Much like the gospel in Luther’s day, the Law was found in the Temple, buried by the dust and cobwebs of idols, cult prostitutes, pagan priests, and detestable lifestyles.

It is truly remarkable that God kept Josiah’s heart fertile to the Word. It wasn’t until Josiah’s 18th year as king, when he was 26 years old, that he first heard the Law read aloud to him. His heart melted and his body quaked. His whole inner man erupted until finally he tore his clothes in terror, for he realized that all of the curses spoken of by God were happening right in front of him! Josiah cried out, “Great is the wrath of the LORD that burns against us because our fathers have not listened to the words of this book, to do according to all that is written concerning us” (2 Kings 22:13). Upon hearing the Word of God, Josiah believed immediately. Now, he needed to know what to do. Thankfully, he turned to the only one who could help: the Lord himself.

God, through the faithful prophetess Huldah, confirmed two truths. The first was that Josiah’s fears were legitimate. The judgments described in the Law would come to pass, and there would be no stopping them. However, the second truth was that Josiah’s faith was real. God said, “Because your heart was tender and you humble yourself before God when you heard what I spoke against this place…I truly have heard you” (2 Kings 22:19). How astounding! There have been maybe a couple kings in Israel’s collective kingdom history that had their prayers confirmed by God, and yet God affirmed to Josiah that he would die in peace and avoid the judgment coming upon Judah.

So the king went to work (2 Kings 23). He gathered all of the people and read the Law to them. That’s pretty similar to a new Christian grabbing his/her nearby friends and sharing with them the gospel message! Indeed, Josiah shared the message with everyone: great and small, rich and poor, near and far. Like a real king, he stood in the gap between God and Judah and made a covenant swearing to follow God, to keep his commands, and to obey his statutes with all of his heart, soul, mind, and strength. The reformation began in earnest, and the people of Judah followed suit.

Josiah immediately cleaned out the temple of all its idols and burned them. He eliminated the pagan priests in the temple who worshiped everything but God. He got rid of the horses and chariots in his own court dedicated to the Sun. He drove out the religious prostitutes. He made a ruin of the high places all over Judah where people would pretend to worship God but really pay homage to pagan idols, often times by offering their children as burnt offerings to idols (remarkably, many of these high places were erected by Solomon). And as if Judah wasn’t enough for Josiah, he went north across the border to Samaria and removed all of their shrines and high places, executing the pagan and hypocritical priests that had provoked God to anger.

Finally, Josiah returned home and reinstated the Passover. It wasn’t enough to remove the rampant idolatry; Josiah had to replace it with what the Law commanded: keeping the Passover and thereby celebrating God’s redemption of Israel from Egyptian bondage. There hadn’t been a Passover in the land since the days of the Judges (not even King David himself kept up with it). Following all this, Josiah continued his relentless campaign to purge Judah of its pagan idols so that the Law of God would be totally established. Humanly speaking, this is as real as a reformation gets.

Today, as we look back to a more recent spiritual reformation, what can we learn about Josiah’s reformation? The first and most important thing to understand is that reformation begins at salvation. Josiah would have had no impetus to undo his ancestors’ paganism had the Law of God not penetrated and taken root in his heart. The same goes for us. Cleaning ourselves up and feigning a moralistic lifestyle doesn’t mean anything if the gospel of Jesus Christ hasn’t made us alive again by the power of the Holy Spirit. Anyone can clean up their act for a while, but only a true worshiper can respond to the reformation of the Holy Spirit. Only one with a tender heart can respond to God’s Law and be totally transformed by the power of the Spirit to the point where it isn’t just a spring cleaning of one’s life. Indeed, it is a total transformation, and it begins with responding to the gospel by confessing your wretched rebellion before God and seeking his forgiveness.

Second, the reformer proclaims Christ and acts. “What must I do now that I am saved?” This is where the Christian faith is totally different than all other religions. We don’t do works to get into heaven. We do works because we are going to heaven. Do not confuse cause and effect. Josiah acted because God had confirmed his tender heart, not because he wanted to gain God’s confirmation. Likewise, a Christian who has declared Jesus as Lord must submit to his Word and allow the Spirit do his sanctifying work. Conformity to Christ will take the rest of your life, but it is worth it! Your life not only changes, but you now have a message to proclaim to the nations!

As you preach the gospel from a pulpit, in a classroom, on the street, or in a conversation, you should be able to call up your changed life as a testimony to the power of the gospel. It verifies the words you say by the actions you do. James 2:26 says that “faith without works is dead”. Therefore, because you have faith, work.

Third, the reformers that come together inevitably impact the society they reside in. It’s clear that, because of the king’s conversion, his nation was impacted. How much more so when God uses the powerful message of the gospel to save individual after individual after individual? Inevitably, society will experience a shock from the number of people that reject worldly practices and conform to a godly lifestyle by the power of the Spirit. Such shock may result in rejection or persecution, or society may choose to embrace it for a time as Judah did under Josiah. But make no mistake. The changed course of a society in this time is temporary. After Josiah’s death, four final wicked kings arose and incited God’s promised judgment through the nation of Babylon. This isn’t unique to Judah. The same society that produced Martin Luther produced Adolf Hitler. The same nation that gave us John Wycliffe also gave us Bloody Mary. We are not out to save societies, though they will be impacted for a time. We are out to give men and women everywhere the gospel so that God will save souls and build his Kingdom.

Finally, the reformer continues to reform until the final call home. Note how many times Josiah went back into the temple, how many different cults he purged, and how many campaigns he engaged in nationwide, even across the border to Samaria. This was no weekend trip for him, no quick and easy task. Likewise, and even more so, conforming to Christ is not a once-and-done deal. It is not a short term excursion. Rather, it is a lifetime of repentance, reformation, and restoration as Paul says in 1 Corinthians 9:27: “I discipline my body and make it my slave, so that, after I have preached to others, I myself will not be disqualified.” How many times do you have to examine yourself to see if you are in the faith? This is a lifelong reformation. The more you come to know Christ, the more aware you are of your own sin. You’ll do battle with your sin again and again, and it may seem never-ending, but take heart. There is coming a day when the reformation will be complete. That day is when God calls you home or when he returns to establish his Kingdom.

Until then, see that your heart is in line with the Law of God, share the gospel with others, let your life testify to the truth of the gospel, and allow the Spirit of God to work mightily in you. May the Lord use you to bring souls to repentance as the day of judgment draws near.

Strong work as usual. I remember, when Against Doubt started several years back, encouraging this team to trust God and do your best job serving him. Proud of you all.

We’re doing a Bible study on 2 Kings and its remarkable how you drew parallels between the Reformation in Josiah’s time and the Reformation of Luther’s time. Will be sharing with my group!

That’s wonderful! I pray that discussion bears much fruit! Come back later and share how it went!

Lord, BLESS this team for their service to YOU. Proud of your hard work, guys!

This ministry is such a blessing. The articles are always such high quality. From one co-laborer in Christ to another, thank you!!!

Thank you for your encouragement Jeremy! It really does strengthen us and especially my dear friend Vinh. I’m thankful we can serve you in this way! Happy Reformation day, dear co-laborer!

Amen, brother. How wonderful to see these articles again!