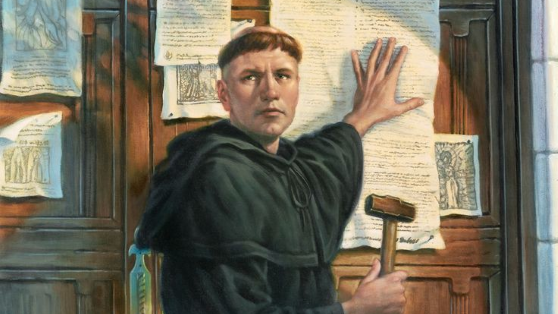 This is a special Against Doubt article commemorating the 500th anniversary of the Protestant Reformation.
Edited by Vinh Le, Joseph Keller, and Scott Beaver.

Exactly 500 years ago on this day, October 31, an audacious monk and professor named Martin Luther stamped his Ninety-Five Theses on the door of the Wittenberg Castle church in Germany. In this, Luther called into question the sale and legitimacy of indulgences (sheets of paper sold by the Church that allegedly absolved people of their sins). Soon after, he preached that popes and councils have no authority outside of the bounds of Scripture, and that salvation is only granted by the grace of God through faith alone.1

It was this historic event that sparked a wildfire now known as the Protestant Reformation. Luther himself was the match that lit the powder keg filled up over time by people like Polycarp, John Wycliffe, John Huss, and thousands more (you can read about these heroic men, women, and children taking a stand for Christ in Foxe’s Book of Martyrs).

The keg exploded in 1521 at the Imperial Diet of Worms in Germany. There, the assembly, presided over by the Holy Roman Emperor Charles V, examined Luther and tried to get him to recant from his “heresies”. But Luther boldly declared, “Here I stand, I can do no other, so help me God. Amen.”2 What an amazing reflection of Jesus’ words in Matthew 10:18-20: “And you will even be brought before governors and kings for My sake, as a testimony to them and to the Gentiles. But when they hand you over, do not worry about how or what you are to say; for it will be given you in that hour what you are to say. For it is not you who speak, but it is the Spirit of your Father who speaks in you.”

Isn’t that amazing? Wouldn’t it be incredible to have God speak for you in a moment of trial? There is a way, but you must start by putting your faith in Jesus Christ and boldly proclaiming his truth. It may not be before kings and governors yet, but can I tell you something? You have to start somewhere. Friends, you can’t get to the kings and governors until you prove yourself faithful with the people around you. Do you think Luther could have appeared before Charles V without first teaching the gospel in his own classroom? Do you think you can preach in front of the White House unless you are comfortable sharing the gospel with a small group of friends or leading a Bible study?

Where does this kind of courage come from? It comes from a deep-rooted love of Jesus Christ. Do you know why the martyrs died for Christ? Because Jesus was not only their Savior and their King, but also their friend. As the Lord himself said, “You are My friends if you do what I command you. No longer do I call you slaves, for the slave does not know what his master is doing; but I have called you friends, for all things that I have heard from My Father I have made known to you.” (John 15:14-15)

Luther did what Jesus commanded him no matter the cost. Risking his life, he translated the Bible into German from the original Hebrew and Greek. Up until this time, the Latin Vulgate version of the Bible was kept under lock and key. Public reading of the Scriptures was strictly forbidden, and a death penalty was instituted for anyone who dared to read, preach, or translate the Bible, lest the common man should read and understand the gospel. Many others, including Wycliffe, Tyndale, Carey, and Calvin, gave their lives preaching and translating the Bible so that all nations would come to know Jesus as their King and Savior, that they would bend their knees in worship willingly rather than forcefully as will be in the day of judgement. Friends, if you truly love Jesus, make known his Word no matter the cost, be it physical or social loss.

THE MESSAGE WE MUST DECLARE

When God first created the universe, he made man in his own image to rule over Creation. Tragically, mankind fell into sin and became separated from a perfect, holy, and just God. Martin Luther understood the gravity of our sin debt. Before he saw the light, he lived in perpetual fear of a righteous God who could strike him down at any moment for his sins. He knew that our good works are like “filthy rags” (Isaiah 64:6) and that we can do nothing to remove our own sins (Jeremiah 17:9, Daniel 9, Mark 7:21, Romans 3:23, Romans 6:23).

But God spared us from the wrath that we deserved by sending his Son, Jesus, to come as a man and die on a cross to pay the penalty for our sins. Jesus accomplished what we never could, paid our debt in full, and rose from the dead to ascend to heaven and intercede on our behalf before the Father. If you believe in this and confess with your mouth that Jesus Christ is Lord, then you will receive his gift of salvation and spend eternity with God.

Jesus summed this message up beautifully in an oft-quoted but under-appreciated verse: “For God so loved the world, that He gave His only begotten Son, that whoever believes in Him shall not perish, but have eternal life” (John 3:16). And, as the apostle Peter declared before the Sanhedrin, “There is salvation in no one else; for there is no other name under heaven that has been given among men by which we must be saved” (Acts 4:12).

This is the gospel message that we must boldly declare and be ready to die for. But I must warn you that people will not like it. Why? Because it’s first and foremost a declaration about the total depravity of man and the holiness of God. In order to ask for forgiveness, you have to admit that you’ve sinned and sinned greatly and that you have absolutely no means to get to heaven on your own. That’s hard to do!

I’ve had many unsaved friends and neighbors throughout my life, and I’ve often felt the strong urge to share with them the gospel message. Recently, the Lord gave me the courage to preach to a family about the salvation that comes through grace and faith alone, and not through works. I started speaking with their eldest son, who is eleven years old (about the age I was when I first believed the gospel). What shocked me was how few of my own Christian friends stood with me on this. One of my friends with whom I have prayed with, studied with, and trained with told me to stop evangelizing to children to avoid offending their parents. How tragic that he would care more about being cautious rather than reaching lost souls for Christ and saving them from the eternal wrath to come! After all, our Lord told us to “Let the children alone, and do not hinder them from coming to Me; for the kingdom of heaven belongs to such as these” (Matthew 19:14).

THOSE WHO LOST EVERYTHING

How often do we shy away from speaking the truth because we’re afraid of offending people? How often do we deny Christ before others because we don’t want to risk ruining our reputations and relationships? Remember how Jude exhorts us to “save others, snatching them out of the fire; and on some have mercy with fear, hating even the garment polluted by the flesh” (Jude 1:23). If we look at the example of Luther and other heroes of the faith, we see just how well they understood this. They risked everything – prestige, reputation, health, wealth, and even their own lives – all for the sake of the gospel message.

One of the early martyrs was Polycarp of Smyrna, who, when asked to deny Christ and declare Caesar as Lord, replied back these great words: “Fourscore and six years have I served him, and he has never done me injury; how then can I now blaspheme my King and Savior?” Historians tell us that he was burned by a vengeful mob in the colosseum of Smyrna, and yet he did not utter a single sigh of pain in the fire.3 What awesome courage to stand against the tide of society and have peace knowing that your spirit is committed into the hands of Jesus!

John Huss believed and proclaimed that everyone should have a Bible in their home in their own native tongue (a thought greatly influenced by John Wycliffe, who translated the Bible into Old English from the Latin Vulgate and was later martyred for his actions). As if his personal convictions weren’t enough, Huss went public with his students and with his pulpit. He was caught by Rome, brought before the council, and told to recant, but he did not. The priest in charge of the condemnation said, “Now we will cook this goose,” (a play on Huss’ name which means goose). Huss immediately retorted, “You may cook this goose, but there will come after me in a hundred years a swan that you will never be able to silence.” They tried to get him to recant one final time, but Huss replied, “No, I never preached any doctrine that was evil, and what I taught with my lips I now seal with my blood!” He was burned at the stake on July 6, 1415. But one hundred years later, just as Huss predicted, Martin Luther, the swan, rose up to take his stand and was never silenced by his would-be executioners.3

Each of these martyrs died because they proclaimed the name of Jesus above all other names. There are countless more who were (and still are) brutally tortured, exiled, and killed, and yet they stood their ground and never recanted. They lived by Paul’s motto in Philippians 1:21: “For to me to live is Christ, and to die is gain.”

My friends, on this Reformation Day, join me in freely proclaiming that Jesus Christ is Lord, and that there is no other name under heaven by which we must be saved. Like Martin Luther and his friends, let us be bold and courageous. Let us never be ashamed to speak the truth. Let us rejoice as we know that our King claims us as his own. Let us go joyfully into the world as sheep among wolves to declare the greatness of our Savior, our great High Priest, and our eternal King. And may we one day hear our Lord say to us, “Well done, good and faithful servant. You have been faithful over a little; I will set you over much. Enter into the joy of your master.” (Matthew 25:23).

I’m finally getting a chance to finish this. As a father, I’m almost in tears to see college students who still truly stand in the faith and hope of Jesus during such times as these. My only request–please, continue.

Amazing article. Thank you for the reminder of being bold in evangelizing, sharing the good news and that nothing more fulfilling than the Love of God!

Read Foxe’s book of Martyrs recently and was moved by it…..I highly recommend it.

It is such a blessing to my soul to see young people so passionate about defending Scripture. I read every month. Keep up the good work, fellas!

Gives me chills to think about how brave these men and women were to stand for TRUTH. Thanks for t he encouragement, Daniel!

Wow – Praise God for your passion spreading the Word. He will bless you for that! I’ll be praying for the family you mentioned.

May the gospel ring and Christ’s name be glorified today!!

An absolute blessing. Thank you Daniel!